In this IPR lawyer’s opinion, the EU trademark authorities are currently waging a war against “unnecessarily” broad marks and marks that cover goods and services not actually produced or sold by the mark holder.

This has led to several initiatives, for example changing the fee structure so that it is cheaper to file trademarks in 1-2 classes rather than encouraging broader filings. The ultimate aim seems to be cleaning up the trademark register and making it easier for the trademark authority and other parties to get a clear grasp of what a trademark actually covers. While this aim is commendable in itself, should you be concerned that your mark will become a casualty of this war effort?

It is in this vein that we turn to the new, amended EU trademark regulation. EU trademark attorneys and EU trademark holders are currently living in interesting times. The long-awaited EU trademark reform has been passed and the new regulation entered into force on 23 March 2016, along with Article 28(8), a special mechanism for amending the lists of goods and services of EU trademarks filed before 22 June 2012. 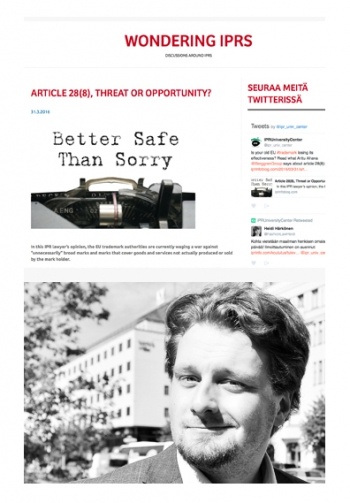 However, this new mechanism and the changes to the lists of good of these old EU trademarks have aroused a great many questions among trademark holders and attorneys, and opinions seem to be divided. On the one hand, trademark holders and attorneys are concerned that the scope of protection of some EU trademarks is about to be reduced. On the other hand, much of the information from the EU trademark authority, the artist formerly known as OHIM (Office for Harmonization in the Internal Market) and since 23 March 2016 now going by the more pedestrian European Union Intellectual Property Office has been conciliatory: not much will change, trademark holders should not be concerned.

Why is this happening?

The roots of this issue are in the EU trademark reform, which has been in the works since 2009. One of the reforms that has been discussed during the process has been the streamlining of trademarks’ lists of goods and services, so that for example a company selling bicycles and bicycle parts does not seek protection for the entire class 12 (including, for example, railway locomotives and airplanes) but rather only for the goods and services for which the mark is used.

This discussion is rooted to a large degree in the European Union Court of Justice’s landmark ruling in IP Translator (C-307/10), wherein the EU Court rendered a decision that a mark filed using class headings (broad designations from the Nice list of goods) does not cover all goods and services in that class, as had previously been the understanding, but only goods included within the literal meaning of the class headings. However, this ruling, which was issued on 19 June 2012, was only applied to new marks and was not applied retroactively, so marks filed using class headings before 22 June 2012 were deemed to still broadly cover goods and services even beyond the literal meaning of the class headings used in the application.

In the EU trademark reform, the legislators decided to plug this “hole” in the new, stricter interpretation of how the list of goods of trademarks was to be assessed. In the amended trademark regulation, the scope of protection even of marks filed before 22 June 2012 would be reduced to only cover the literal meaning of the class headings. So, for example, a mark filed in 2009 using class headings in class 9 might not in the future cover software, which is not included in the class headings.

In effect, what the legislator decided in the amended EU trademark regulation was that the ruling in IP Translator would be applied retroactively to trademarks that had been filed before the landmark ruling. While one can quibble whether this is retroactive legislation as such (as the previous interpretation of class headings was not actually enshrined in the law), it was certainly a giant about-face in the trademark practice of OHIM/EUIPO.

However, to sweeten the deal and ostensibly to avoid having to quarrel with EU trademark holders and their representatives, the EU decided to include a special transitional period of six months (23 March 2016 to 23 September 2016) during which EU trademark holders could make a declaration to the new EU Intellectual Property Office under Article 28(8) and “rescue” individual goods and services not included within the literal meaning of the class headings and add these goods or services to their trademarks. This mechanism is special because it seems to violate one of the cardinal rules of trademark law: you cannot amend a trademark’s list of goods after it has been filed – you can only reduce the scope of protection, not change and definitely not broaden it.

The first and most relevant question that trademark holders should ask themselves (or their trademark attorney) is whether their trademarks are affected by the amendments to the Trademark Regulation and whether they can file an Article 28 declaration. There are two requirements: the mark must have been filed before 22 June 2012, and the mark must have been filed using class headings in at least one class. Furthermore, this change only applies to EU trademarks, so for example national Finnish trademarks filed using class headings before 22 June 2012 will, at least for now, still have broad coverage over goods or services in the classes in which they are registered.

If you are wondering whether your mark was filed using class headings, they can be found at http://web2.wipo.int/classifications/nice/nicepub/en/fr/edition-20160101/taxonomy/. However, make sure that you are looking at the right list, as the Nice class headings have changed in some classes over the years, and you should be looking at the list that was in force at the date when your trademark application was filed.

What exactly is the Article 28(8) declaration?

Is this really such a big deal? What happens if I don’t do anything?

In this respect, I have to somewhat disagree with the EU trademark office. They have said that this amendment is probably not going to lead to major changes in the scope of protection of old EU trademarks. However, in some cases there is a real risk that the trademark will no longer cover goods or services that are crucial for the trademark holder.

A few good examples are software in class 9, which was not included in the class headings until 2012 and might therefore slip outside the scope of protection unless added via the declaration. Another particularly problematic area is parts and fittings for machines in class 7, and vehicle parts and fittings in class 12. The established view is that parts and fitting for a certain good are not covered by a term designating the good itself, so for example “vehicles” would probably not cover “mudguards”, which are parts of vehicles.

However, even in cases where the classes in question have very broad class headings (such as “chemicals used in industry” in class 1), it would be advisable to at least review the goods and services covered by the trademark together with a trademark attorney. Better safe than sorry, particularly as the interpretation of the EU trademark office or of national courts may change again in the future, and at that point the safest option would be to have a trademark that really covers the core goods or services sold under that mark.

Summa summarum: have your trademarks checked!

So, what does this mean? Is your old EU trademark in danger of losing its effectiveness? Do you need to file the declaration?

There is no simple answer to these questions, as it depends on what classes your trademark has been filed in and what field of business you are in. With certain trademarks, there may be little need for an Article 28(8) declaration even if your mark is eligible, as the class headings of certain Nice classes are so broad that they will likely cover most if not all of the relevant goods or services that you might wish to protect. However, for other trademark holders, there may be a very real threat of losing core goods or services if nothing is done.

Summa summarum, I would recommend that you get your trademarks checked so that they can assess whether your trademarks are affected by the amended regulation and whether there is a need for an Article 28(8) declaration.